Corsica covers an area of 8,700 square kilometres, making it the fourth largest island in the Mediterranean, developed mainly in length: 183 km from Cap Corse in the north to  Cap Pertusato in the south, against 83 km in width. It is characterised by a mountainous ridge running from north-west to south-east that gives rise to a rugged and mountainous territory, with numerous reliefs rising a short distance from the sea and reaching high altitudes: more than 100 mountains exceed 2,000 metres in altitude (the highest peak is Monte Cinto, 2,706 metres above sea level).

The formation of Corsica and its geographical location explain not only its geomorphological characteristics but also its biotic component.

More than 20 million years ago, the Sardinian-Corsican plate slowly detached itself from the mountainous arc that connected the Pyrenees to the Alps over a period of about 5 million years to reach its current position. The tectonic movements of collision and subduction of the continental plates of Europe and Africa then shaped the island and led to the formation of the mountains. 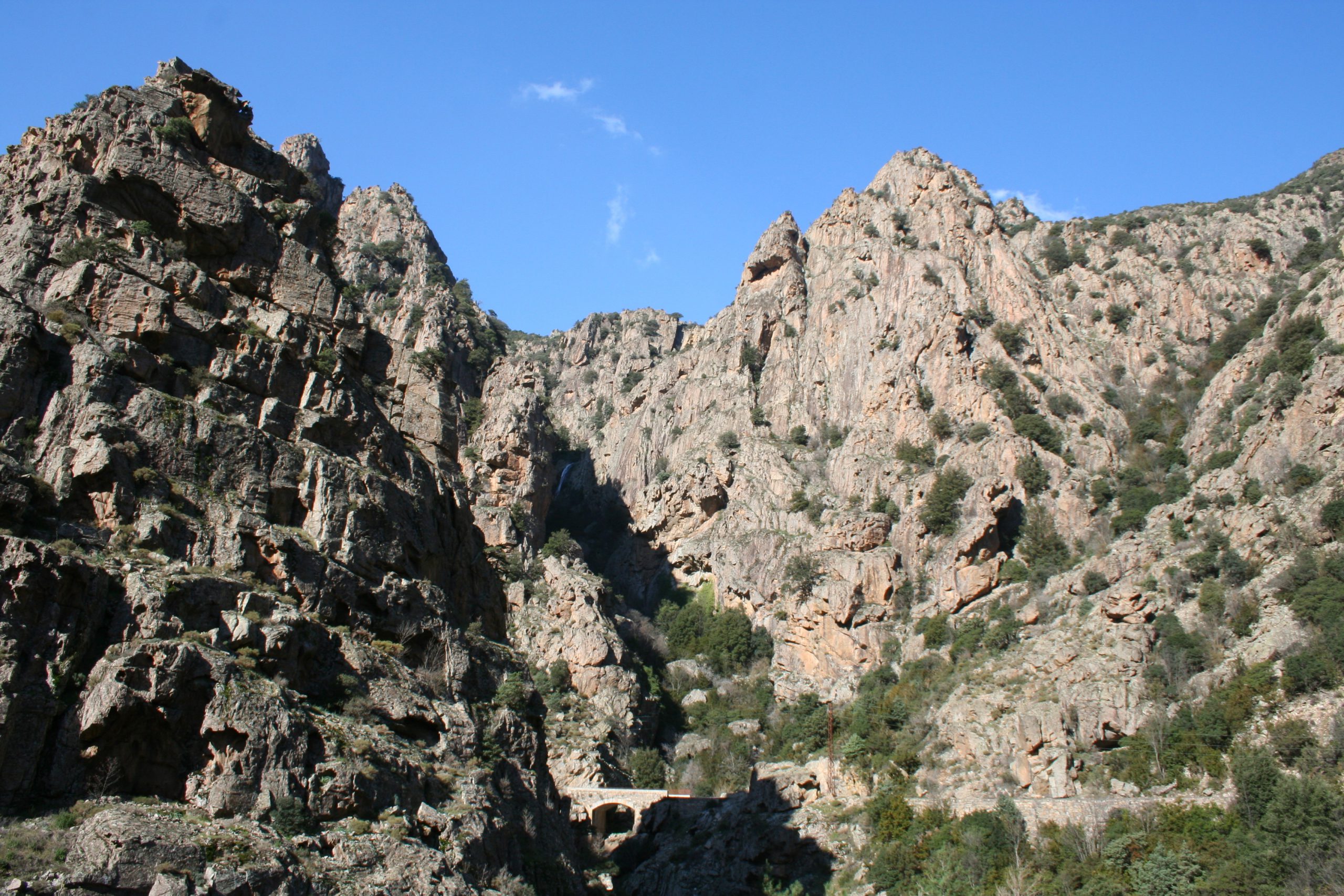 The interior of Corsica

Later, in the Quaternary period (between 2.6 and 1.5 million years ago), the ice ages caused the level of the Mediterranean to drop by about 150 m, which led to the formation of a land area between Corsica, Sardinia, the Tuscan islands and Italy. This event largely explains the origin of the island's fauna and flora and their similarities to the species found in Sardinia and the Tyrrhenian islands.

From a geological point of view, Corsica is divided into four large areas:

The limestone rocks are limited to the regions of San Fiurenzu and Bunifaziu and a few sectors in the central part of the island. 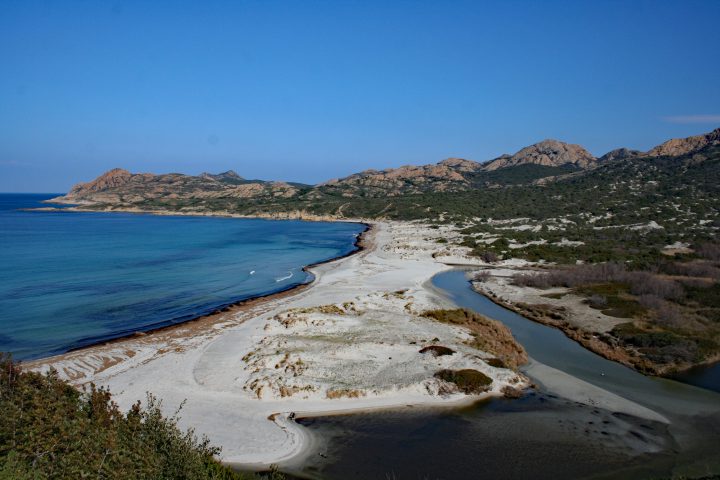 The beach of Ostriconi, in north-western Corsica

The island's amphibian population is very interesting, including endemic species such as the Corsican discoglossus (Discoglossus montalentii), the Corsican salamander (Salamandra corsica) and the Corsican newt (Euproctus montanus). Among the reptiles, the Fitzinger's algiroid (Algyroides fitzingeri) and the Tyrrhenian lizard (Podarcis tiliguerta), both endemic to Sardinia and Corsica, are worthy of note.

The inventory of birds in Corsica counts 135 breeding species, including six species of seabirds and 24 occasional birds. Three species disappeared as breeders in the 1960s: the white-tailed sea eagle (Haliaeetus albicilla), the russet humpback (Oxyura leucocephala) and the Yelkouan shearwater (Puffinus yelkouan).

Almost a quarter of the species of non-marine birds that regularly nest in Corsica (23%) have distinctive morphological characteristics. The Corsican nuthatch (Sitta whiteheadi) is the only species which is strictly endemic to Corsica but 22 other taxa have morphological, chromatic or ecological features which differentiate them from their nominal forms. The characteristics of these birds are often shared with the same species found in Sardinia and, in part, also in the Tuscan archipelago and the Balearic Islands or even in some areas of the Italian peninsula, the Iberian peninsula and North Africa.

As far as mammals are concerned, it is worth mentioning two species that can be found in the extensive forest cover: the mouflon (Ovis aries musimon) and the Sardinian deer (Cervus elaphus corsicanus), an endemic subspecies that has returned to Corsica thanks to the reintroduction of individuals from Sardinia since 1985.

The LIFE MILVUS project will be developed in Corsica and, in particular, in the central- north-western part of the island, in the Regino Valley (Balagne region) and in the Ajaccio region.

The Regino Valley runs between mountains over 1,000 metres high and then flows into the coast. It is located in the crystalline zone of the island and is dominated by 90% granite porphyry, interspersed with areas of Quaternary sediments, sedimentary rocks and metamorphic formations. A significant portion of the territory is occupied by pastures and olive groves. 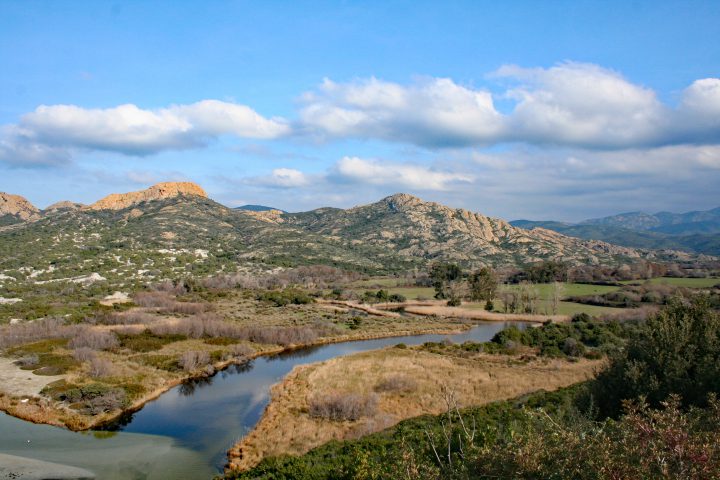 A view of Balagne

The Regino Valley became an IBA (Important Bird and Biodiversity Area) in the early 1990s due to the significant density of pairs of red kites (Milvus milvus) and the presence of other species listed in Annex I of the Birds Directive. These include the European nightjar (Caprimulgus europaeus), which boasts an exceptional density of 1-4 pairs per square kilometre, the woodlark (Lullula arborea), the red-backed shrike (Lanius collurio) and the woodchat shrike (Lanius senator), which also have remarkable densities. The red kite nests in the area with the highest known density of pairs in an island environment. Pastoralism and semi-intensive agriculture favour this species as well as other bird species listed in Annex I and explain their significant densities.  The Ajaccio area, characterised by its wide gulf which is the deepest of the four inlets in western Corsica, is surrounded by hills of moderate altitude. The landscape shows soft reliefs and valleys that descend to the coast. Only the jagged coastline of Capu di Muru, at the southern entrance to the Gulf, is distinguished by its wild and inaccessible environment.  The area is the result of human remodelling and is home to woodland, orchards, scrubland and agricultural areas, the latter of which are mainly found on the plains. This beautiful mosaic of environments is tending to contract due to the expansion of Ajaccio's suburbs and coastal urban development.  The Ajaccio region is home to many pairs of red kites and several pairs of peregrine falcons (Falco peregrinus) and golden eagles (Aquila chrysaetos).

The countryside of the Ajaccio area 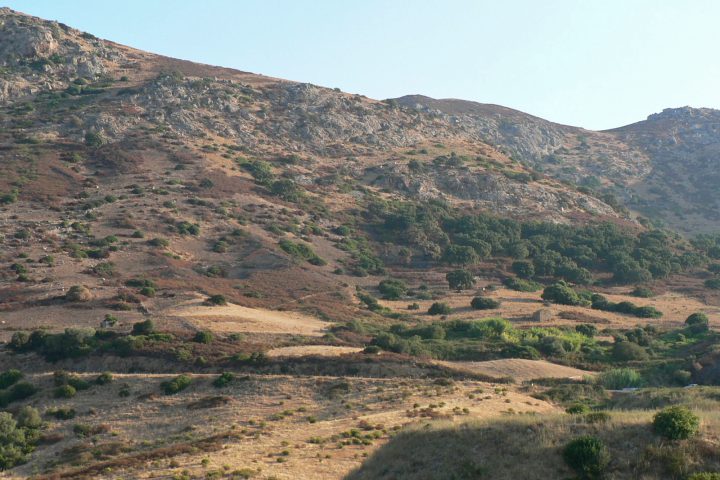 The hills of the Ajaccio area

The maquis distributed along the coastal area is home to the Marmora's warbler (Sylvia sarda) and the Dartford warbler (S. undata). The marine islets are home to several pairs of ospreys (Pandion haliaetus), a species that has the southernmost nests in Corsica, the Mediterranean shag (Phalacrocorax aristotelis desmaresti) and the Audouin's gull (Ichthyaetus audouinii), with the only stable colony in France.