The Aspromonte National Park is located in the southern part of Calabria and occupies a large portion of the narrow strip of land that, enclosed between the Ionian and Tyrrhenian Seas, forms the southernmost tip of the Italian peninsula.

The territory is characterised by the Aspromonte mountain massif, whose highest peaks are almost 2,000 metres high. These 'Southern Alps' or 'Calabrian Alps' consist mainly of metamorphic (gneiss and schist) and magmatic (granite) rocks, of older origin than those of the Apennines and the result of alluvial deposits, magmatic intrusions and uplifts.

The morphology of most of the park is rather rugged and irregular and is centred on the cone-shaped, pyramid-shaped Aspromonte mountain complex, in which the Montalto (1,956 m a.s.l.) stands out, from which a network of ridges alternating with deep valleys branches off. Limited flat areas extend on the tops of the reliefs. On the Ionian side, the reliefs slope down along the coast in a uniform and relatively gentle manner, while on the Tyrrhenian side, the slopes are interrupted by four flat terraces with overlapping levels. 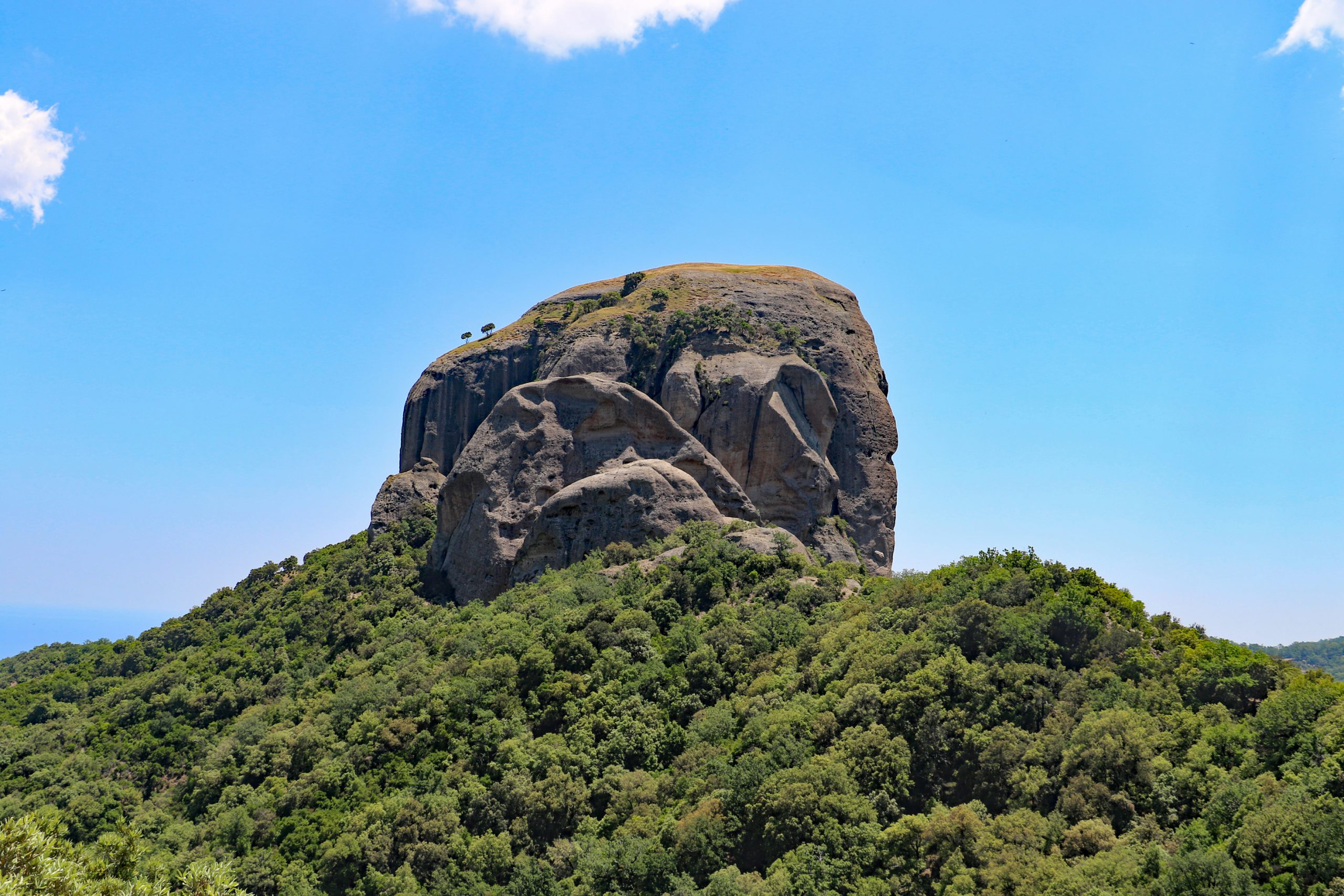 The orography of the area combined with the typically Mediterranean rainfall regime determines the presence of torrential watercourses, the fiumare, which in the winter period have significant flow rates and form appreciable waterfalls in their upper stretches; in the summer and autumn periods, they show a reduced flow rate that sometimes runs out completely. It is the Ionian slope that has the widest torrents.

The project area, in particular, is located in the southern part of the park, in a hilly strip that embraces the Fiumara Amendolea, one of the largest in southern Calabria, which is characterised by medium-high hills, mostly between 300 and 1,000 metres above sea level. Two major reliefs stand out (Mount Pietre Bianche, 1,436 m above sea level, and Mount Cavallo, 1,331 m above sea level), covered by an alternation of forest, scrub, pastures and cultivated land. The area occupies approximately 13,000 ha and includes the northern portion of the SAC IT9350145 Fiumara Amendolea (1,560 ha). 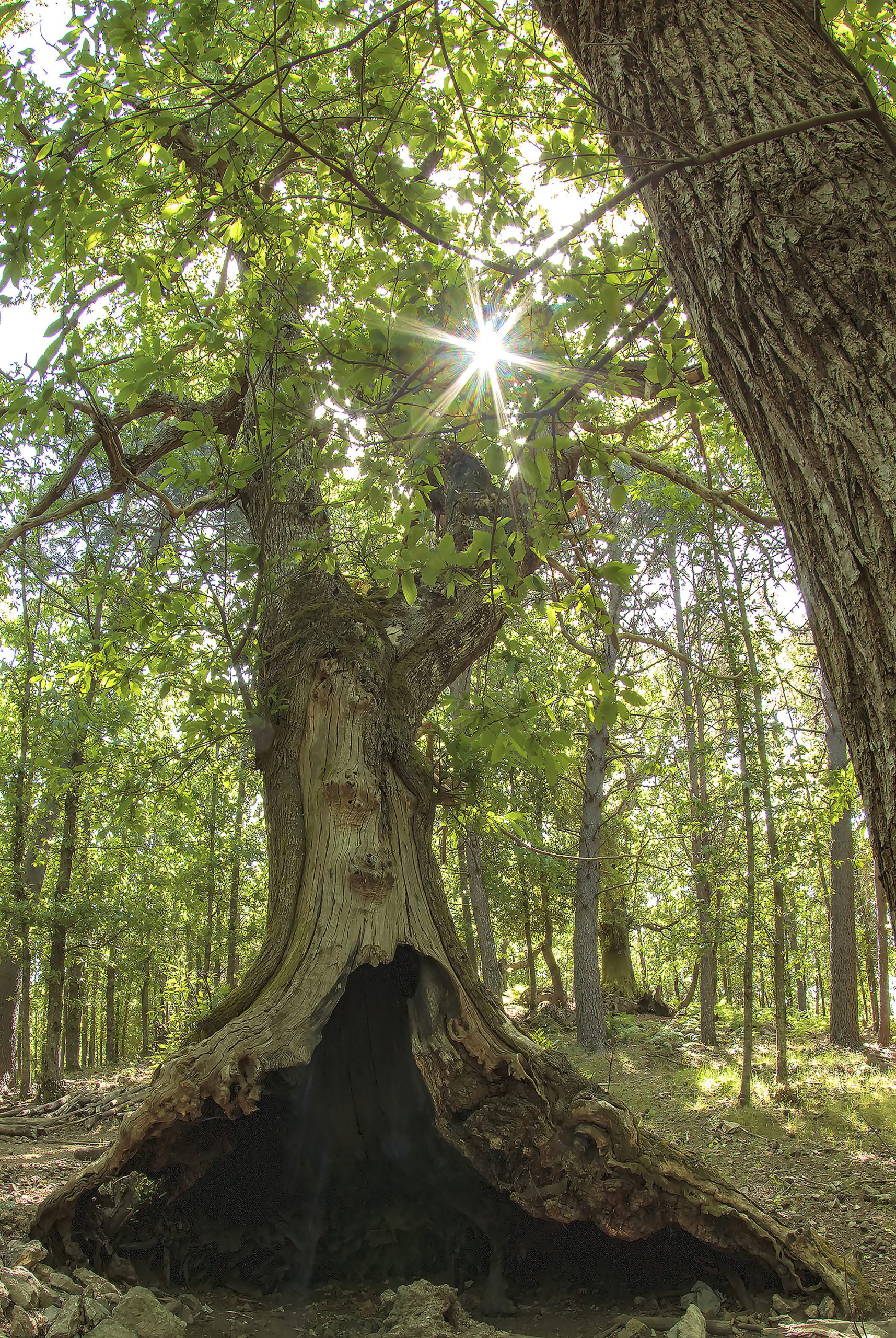 The Park's climate is sub-Mediterranean-temperate in the mountainous areas and Mediterranean in the hilly ones. The Tyrrhenian side has the highest rainfall, due to the blockage exerted by the Aspromonte massif on the humid currents coming from the west; the Ionian side is warmer and drier.

Due to the considerable gradient in altitude (the protected area stretches from about 100 m to almost 2,000 m above sea level) and the different geological and climatic characteristics of the two slopes, the vegetation in the park shows a significant lack of homogeneity.

In the mountain belt, on an area of about 40,000 ha, pure beech woods (Fagus sylvatica) extend; at higher altitudes, silver fir (Abies alba sp. apennina) is mixed in, which only in limited areas forms pure woods, mostly localised in the summit areas of the central area of the park. The undergrowth of the beech forests hosts species found at the southern edge of their range such as the Apennine lungwort (Pulmonaria apennina) and the Apennine foxglove (Digitalis micrantha). Yew (Taxus baccata) is rarely present and, in the areas between 1,200 and 1,400 m a.s.l., holly (Ilex aquifolium) beech woodland is characteristic, forming the Apennine Beechwoods with Taxus and Ilex.

At the highest altitudes of the elevations, above 1,400 metres, the beech is sometimes coppiced, mostly aged and in the process of being converted to a forest; in the southern areas, the beech forest is characterised by undergrowth with hemispherical juniper, Juniperus hemisphaerica, Aspromonte pin, Armeria aspromontana etc.

Small streams run through the beech forests and are home to various endemic herbaceous species.

Along the entire area around the Menta Dam, there are Calabrian pine forests of natural origin, sometimes mixed with beech and with the presence of southern oak.

The central-northern area of the park, mainly along the ridge that acts as a watershed between the Ionian Sea and the Tyrrhenian Sea, is characterised not only by natural forests mainly dominated by beech trees, but also by reforestations, which have been in place for about 60 years, predominantly of Calabrian pine.

In the areas located at altitudes below 1,000 m a.s.l. there are predominantly holm oak (Quercus ilex) woods, sometimes mixed with deciduous oaks and, particularly in the lower Ionian area, with downy oak (Quercus frainetto), fragmented by pastures. Cork oak (Quercus suber) is present in a limited area in the municipality of San Giorgio Morgeto.

The north-western slope of the massif has, between 1,000 and 1,300 metres, vast plateaus used for cereal and horticultural crops and, where these have been abandoned, there are shrubs of aquiline fern (Pteridium aquilinum), coalmen's broom (Cytisus scoparius) and, less frequently, Calabrian broom (Genista brutia).

On the Tyrrhenian side, the sub-mountain belt, below the beech forests, is affected by discrete areas of chestnut woodland (Castanea sativa), sometimes also present on the Ionian side, in the cooler areas, immediately above the holm oak forest. 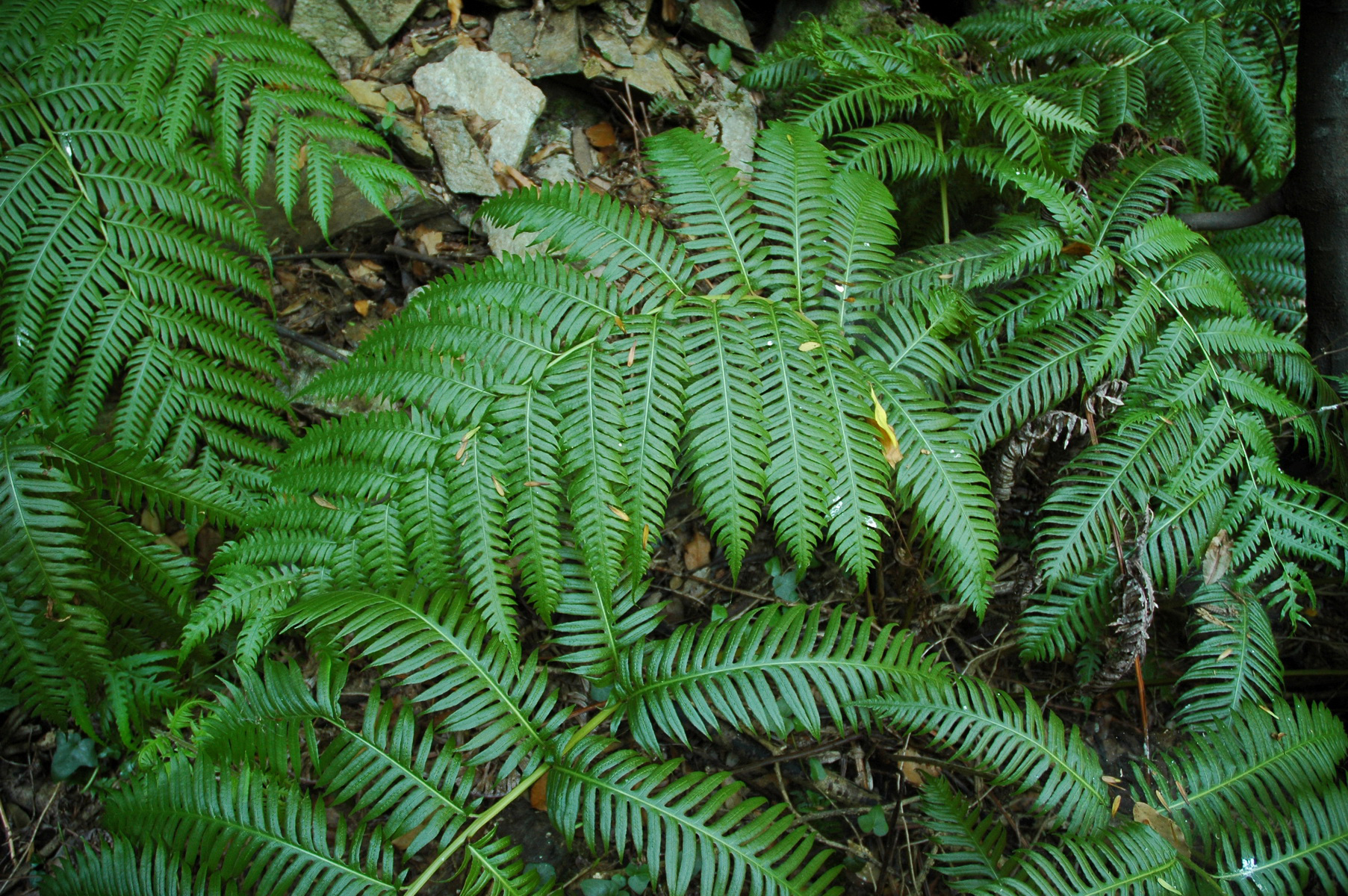 The narrow valleys that cut into the reliefs are home to woods of Neapolitan maple (Acer neapolitanum) and willow; of particular interest is the Aspromonte endemism Salix oropotamica. The waterfalls that form along the watercourses create ideal environments for the extremely rare bulbiferous fern (Woodwardia radicans), a tropical relict.

The hilly strip is the one most affected by anthropic modifications. It is dominated by cultivated land (citrus and olive trees), pastures and scrub with heather (Erica arborea) and other evergreen species, first and foremost the strawberry tree (Arbutus unedo). 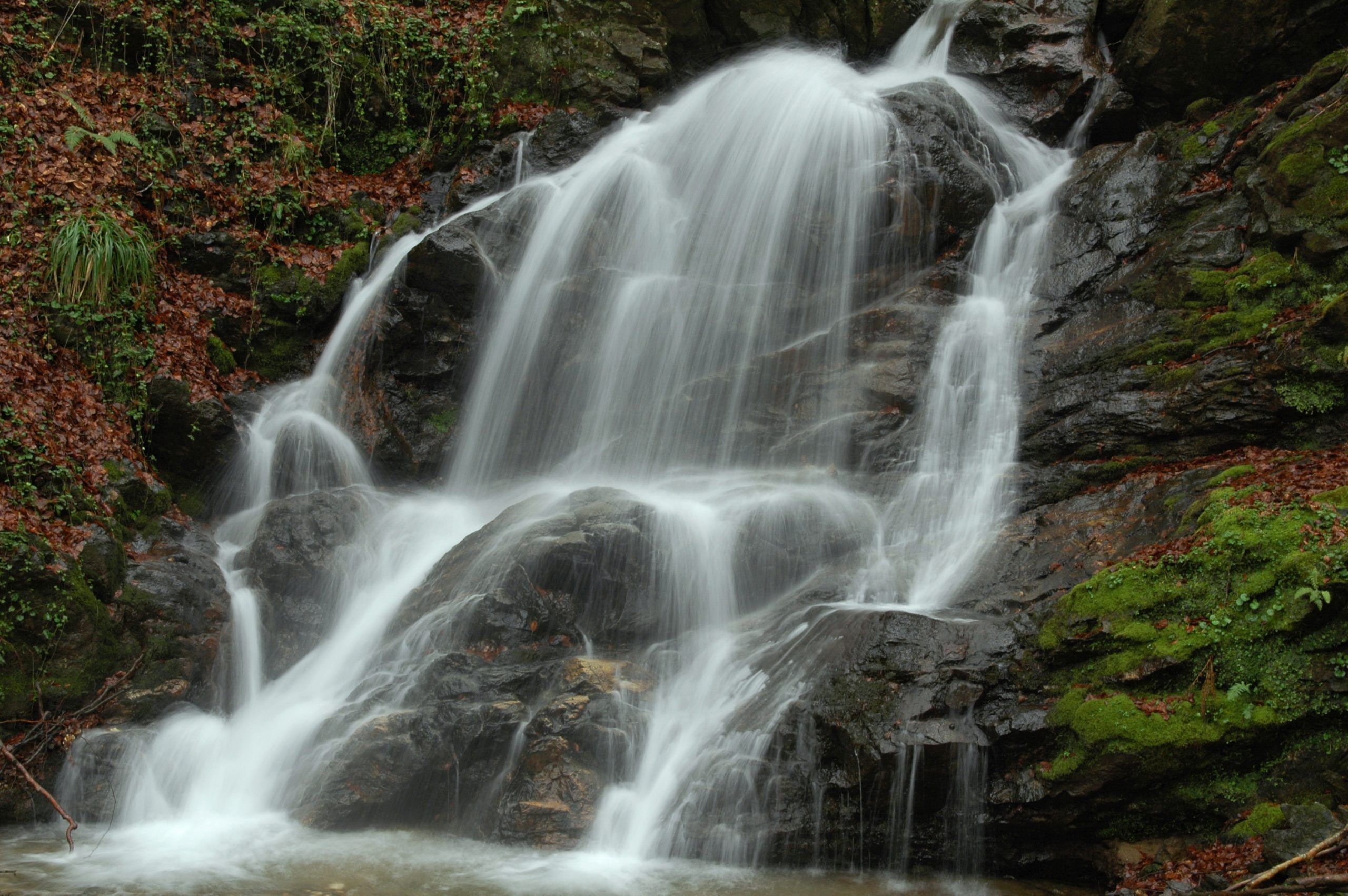 The Park's fauna is of extreme interest both due to the variety of environments that characterise it and to its geographical position, located as it is on the edge of the southern Apennine chain. This has meant that during the glacial epochs many species, especially of invertebrates, were able to reach the Aspromonte massif but then remained isolated there, sometimes giving rise to speciation and, therefore, to the presence of endemisms.

The amphibian population, which finds ideal habitats on the wetter Tyrrhenian slope, includes two species that are at the southern limit of their range here: the spotted salamander (Salamandra salamandra) and the Apennine toad (Bombina pachypus).

There are also numerous reptile species including the terrestrial tortoise (Testudo hermanni) and the Hugyi viper (Vipera aspis hugyi).

The avifauna includes around 80 breeding species. The rock partridge (Alectoris graeca) nests in circumscribed open areas of the reliefs, and in the sunniest and stoniest areas, the pallid flounder (Petronia petronia) can be found.

In cultivated areas, the skylark (Galerida cristata) and the skylark (Alauda arvensis) are common, while the sandpiper (Calandrella brachydactyla) and, above all, the woodlark (Lullula arborea) are rarer.

The Aspromonte Park and the Tyrrhenian areas bordering it constitute an important bottleneck for migratory birds of prey heading to or from Sicily. Among the many species observed here are the honey buzzard (Pernis apivorus), marsh harrier (Circus aeruginosus) and black kite (Milvus migrans). 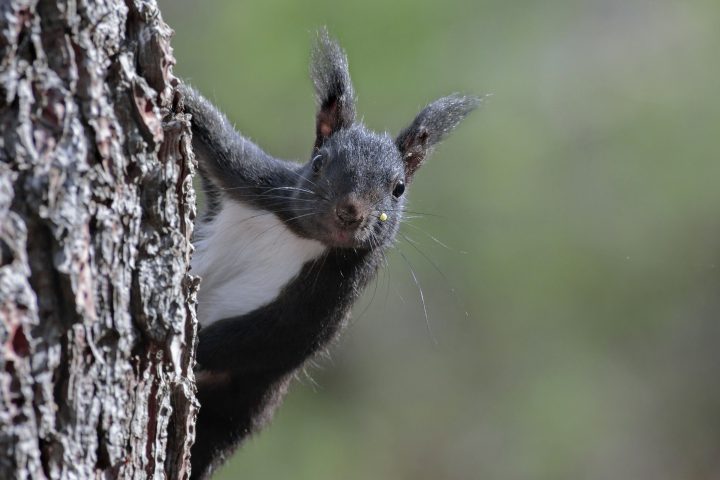 As far as mammals are concerned, forest areas are of particular importance, as they are frequented by wolves (Canis lupus italicus), wild cats (Felis silvestris), martens (Martes martes), black squirrels (Sciurus meridionalis) and driomys (Dryomys nitedula), the latter species having a very limited and fragmentary range in Italy. The skunk (Mustela putorius) also moves near woods and watercourses.